Research in extreme star formation: Early in its history, the Milky Way formed many massive and luminous star clusters, many of which have survived to this day in the form of globular clusters. Currently the disk of our Milky Way does not seem to be able to form such massive clusters, suggesting that how stars form has changed since the Milky Way was young. However, young clusters that appear to be as massive as globular clusters do appear to be forming at present, in nearby galaxies. Young, forming massive star clusters or "super star clusters" are examples of extreme star formation taking place in many galaxies other than our own, and this is the area of my research. 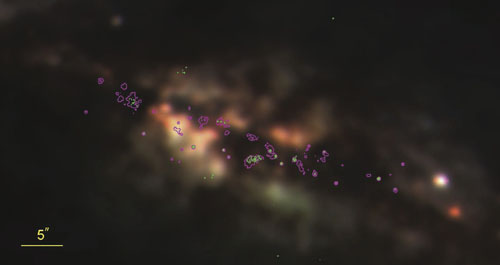 Where are the regions of extreme star formation? The photo at left shows the dwarf starburst galaxy, M82, as it appears in radio waves, in the color contours. The underlying color image is a false color near-infrared image of starlight from the Spitzer SINGS survey. The radio light comes from hot gas, like the Great Nebula in Orion. The gas is heated by the light of massive, young blue stars. The radio image has high (~0.2") spatial resolution that is able to resolve detail as small as a few light years, about the size of the Great Nebula.

Magenta contours represent emission from light at a wavelength of 2cm, green contours from waves at 7mm. Nearly all of the radio emission comes from the obscured regions, which is to be expected for the very youngest clusters, that are still embedded in their birth clouds. From this work we estimated that about 10 percent of the 10 million year lifetime of a blue O star is spent embedded in dusty clouds. The radio image was made using the NRAO Very Large Array. Tsai et al. 2009.

The advantage of radio emission for tracing star formation is that it is unaffected by the dust extinction, which can be extremely high in the youngest star-forming regions. The VLA at its highest frequencies is a great way to measure the energetics of the youngest massive clusters (e.g., Murphy et al. 2011).

Is extreme star formation a different kind of star formation from what we observe in the Milky Way? Star formation in the Milky Way is slow and inefficient; at any given time only a percent or less of the mass within a giant molecular cloud is in the form of young stars. The existence of 10 billion year old globular clusters in the halo of the Milky Way implies that this efficiency was much greater in the earliest stages of its formation, since efficiencies of closer to 50% are required to form such long-lived clusters.

What conditions favor efficient star formation? I am presently using data from the Submillimeter Array (SMA) and the Atacama Large Millimeter-Submillimeter Array (ALMA), to observe the efficiency of star formation in the youngest super star clusters. The high resolution of array telescopes allows the imaging of molecular clouds on the scales of individual giant molecular clouds, or better. ALMA can image down to the scales of star clusters themselves, resolving regions only a few light years across. 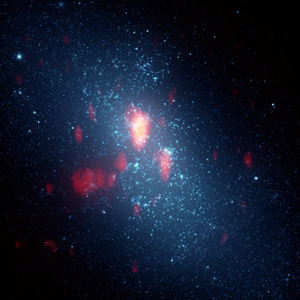 At left is the dwarf spheriodal galaxy, NGC 5253. This tiny galaxy, visible in optical starlight from a Hubble Space Telescope image underneath the radio image, has been forming super star clusters for a least a billion years. How does it do it? Part of it could be the gas streamer falling into the galaxy. The radio emission from the streamer is visible in red on the left side of the photo... the molecular gas streamer is detected in the emission from carbon monoxide mixed in the mostly hydrogen gas. In fact, most of the molecular gas in this galaxy is located outside the galaxy, origin unknown. Definitely an unusual star-forming environment. Turner et al. 2015, Nature. 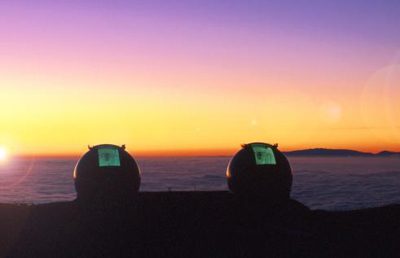 What is the direct effect of star clusters on their environment? Extreme star forming regions contain many stars, and where there are many stars there are O stars. O stars have enormous potential to inflict mayhem on their environments. In the Galaxy, having more than a few O stars in a single region is rare. This is not the case in super star clusters, which may contain a million stars and a few thousand O stars within a region only a few light years across.

What are the effects of stellar winds on the surrounding gas clouds in young super star clusters? How and when do these clusters halt accretion; what do they do to the nearby molecular clouds?

In the image of NGC 5253, we detected a bright gas cloud coincident with the "supernebula" and its embedded super star cluster. This shows up as the bright gold source near the center of the galaxy. This gas cloud, detected in carbon monoxide, is quite hot by interstellar standards, about 300K, or close to room temperature. Most interstellar clouds are cold, about 10K. It is not surprising that this cloud is warm, because of the embedded star cluster. However, this gas cloud, which we call "Cloud D", is odd in other ways: for one thing it is very, very dusty. The amount of dust is about 10,000 times the mass of our sun, and is ten times the amount we would expect for a cloud of this mass. We speculate that the dust is "stardust" produced by the stars within the cluster, and not yet dispersed by the winds of the stars, or by supernovae.

Using the NIRSPEC instrument on the Keck Telescope have found that the linewidths of the hydrogen emission lines of super star clusters are not so different from the linewidths of Galactic HII regions containing only one or two O stars, which is a little surprising. We attribute this to the gravitational pull of the massive cluster, which can contain even hot, ionized gases. I am also working with data from the TEXES mid-infrared spectrometer using the NASA Infrared Telescope Facility to make observations of heavy element ions such as neon and sulfur from HII regions. Heavy elements have smaller intrinsic linewidths and allow precision kinematical analysis. We have evidence of systematic flows in super star cluster nebulae that suggest either a champagne or blister flow or outflows.

Above is the Keck telescope image from the Keck Observatory webpage.

What can chemistry tell us about extragalactic star-forming environments? The relatively high spatial resolution of millimeter interferometers revealed that the chemistry of molecular clouds is strongly dependent on their location within a galaxy. We are able to determine if clouds are affected by interstellar shocks, or radiation fields, or are relatively quiescent, just from their chemistry. This is a promising new field. The first imaging chemistry study of a galaxy was done in collaboration with (then) student David S. Meier, and is part of a series of studies of chemistry in nearby galaxies. This field has a very promising future.

In the image above right, molecules in the central arcminute (300 pc or so) of the nucleus of the nearby spiral galaxy Maffei 2, from Meier & Turner 2012. 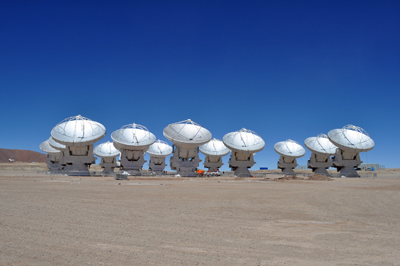 What next? ALMA. The new instrument, ALMA, represented in the array at left, is just coming online and is still being commissioned. This instrument will transform our knowledge of dust and gas around extragalactic star-forming regions. It will be ten times more sensitive than current millimeter arrays, and it works in the submillimeter too.

I have served on many of the committees leading to the design of this telescope, starting when it was the U.S.-only project, the Millimeter Array. I spent three months in 2011 in Chile helping out with commissioning, reducing science verification data. I can attest that the early data from this instrument is already amazing! There is no telling what is coming next, expect to be surprised.